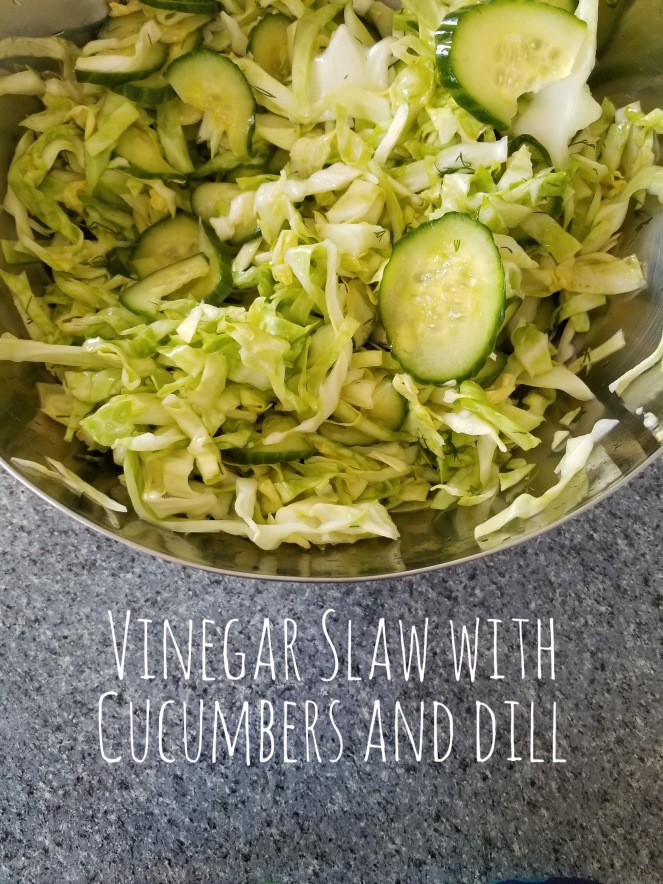 Recipe 18 from The Smitten Kitchen Cookbook by Deb Perelman

Okay, folks I’m back at it. February has been a blur and I can’t believe we’re in March this week. I have been wanting to make this slaw to kick off the salad chapter for so long. But I knew we wouldn’t really eat it unless it was paired with something bbq-ish.

So, I decided I would make it as a topping for bbq chicken sandwiches which is why it has taken me so long to make and write about. I kept forgetting to thaw out the chicken and then I had Blue Apron and Hello Fresh boxes to use and the whole recipe got away from me.

My impulse to do it Friday drove me to just throw the chicken in the crock pot and hammer it out quickly which turned out to be way less complicated then I imagined.

Okay, this one is easy. No fancy kitchen tools…just cut, mix and let it do it’s thing. Got to love that.

You will want to give yourself time to make it and let it sit since it needs to absorb the dressing. So, maybe plan accordingly if you want to add this to a meal.

I think it’s pretty with all the green and the sweet and tangy dressing goes really nicely with the BBQ chicken sandwiches I ended up making.

As an aside…I didn’t do fancy bbq chicken. I just threw 3 frozen chicken breasts in the crockpot for 2 hours on high then added some brown sugar and bbq sauce and let it cook for another 30 min before I snapped this picture.

Pile it on a bun with the slaw and it’s a great lunch or dinner for a small crowd. I also added some as a side to the lamb a beef burgers from Blue Apron we had for dinner. The burgers had a Greek flair and the slaw paired really nicely with the flavor of the burgers and side of roasted carrots. It will probably be the side salad to a few more dishes this week because this makes up quite a bit.

I’m providing the recipe for the slaw below from the cookbook… paraphrased. This recipe is worth a try if you’re a fan of non creamy slaws for your bbq or burger meals!

*Vinegar Slaw with Cucumbers and Dill

Deb’s Tip: can sit in fridge for up to one week covered.

One thought on “Vinegar Slaw with Cucumbers and Dill”