Recipe 13 from The Smitten Kitchen Cookbook by Deb Perelman 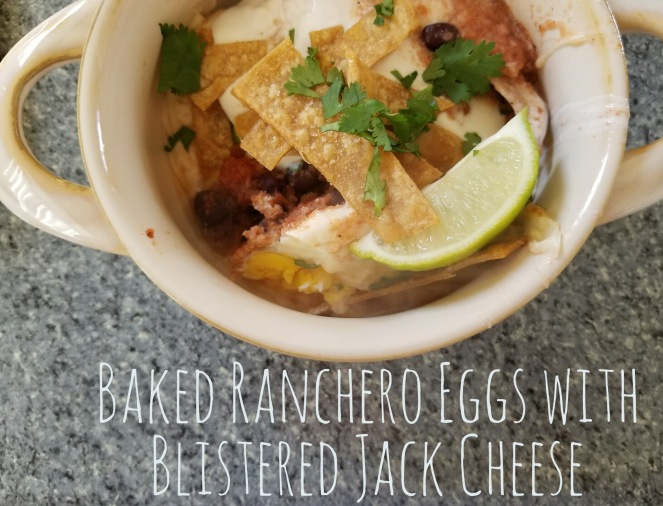 WW Note: I’m happy to say this is a low point dish. For no modifications other then greek yogurt you can enjoy 1 of 6 portions for 5 points. If you swap out the regular jack cheese for reduced fat jack cheese you can drop it to 4 points. If you reduce the portions to 12 then this drop to 2 points. Very reasonable!!

This was a fun one for me. I am a big fan of huevos rancheros for breakfast and yet I’ve never really tried to make them myself.

My favorite place to get them, funny enough, has been from Ruby’s Diner. I think you may only know about Ruby’s if you’ve been to Southern California but think themed diner chain known more for shakes and burgers more than breakfast. 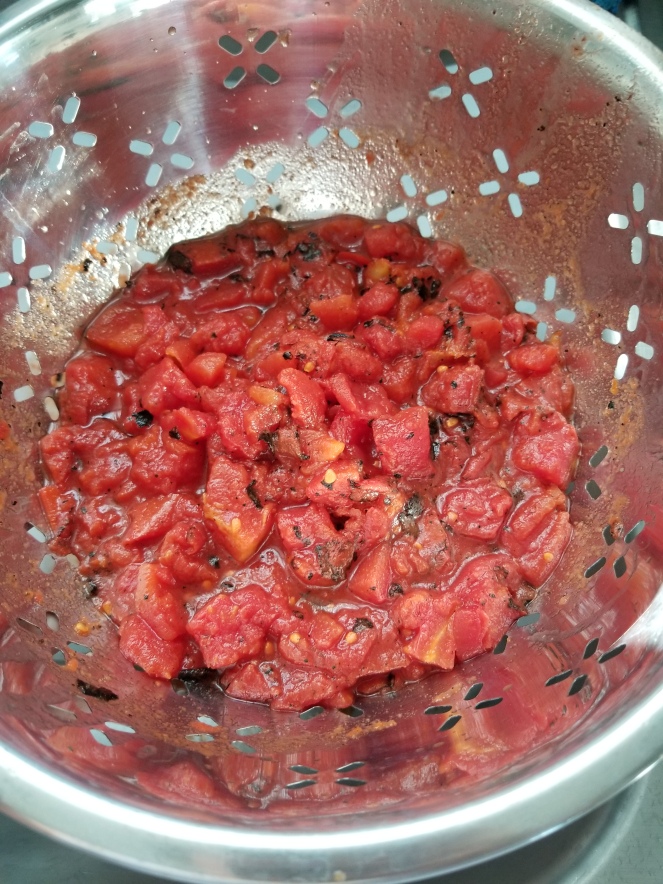 But the way they make them there with the crunchy corn tortilla just makes it the best I’ve had.

Deb’s recipe for Ranchero sauce with this recipe is really tasty. I would probably just make that again to serve with eggs if I nothing else. Plus the lime crema….mmmmm. This was a good one.

What was not good was the eggs. And the only reason I say that is because I don’t like hard boiled eggs. 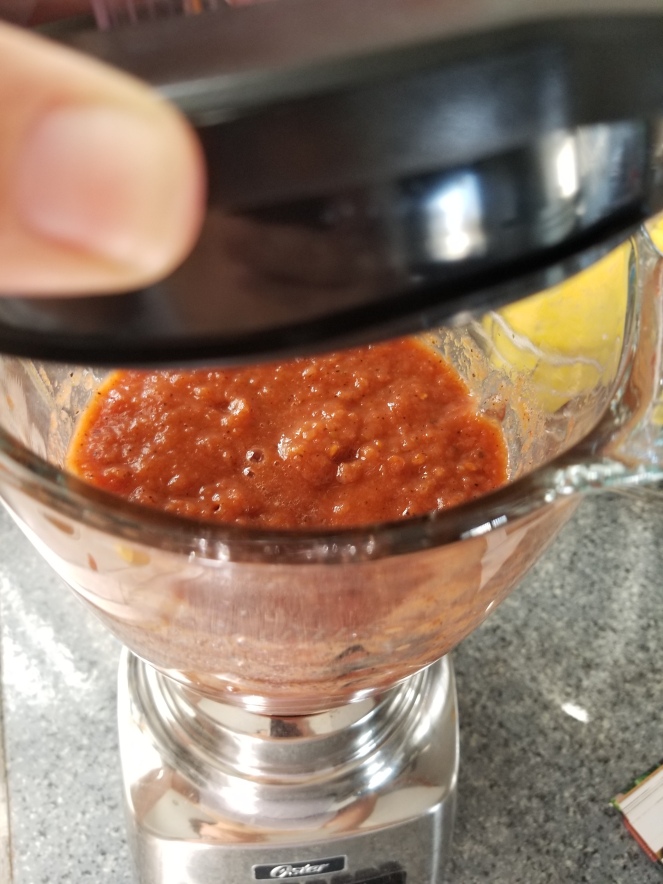 Mind you, that’s not how they tell you to cook them, but….just a tip….if you keep them in too long, you’re going to get hard boiled eggs. *sigh*

This dish was actually pretty hard to figure out timing wise. She suggests using a cast iron skillet and I don’t have one so I did my Dutch oven instead since its oven safe.

Its possible the shallow skillet would have helped the eggs cook more evenly. However, with the Dutch oven I had some eggs cooking quicker then others. Which you’ll see in pictures below.

I believe the goal was to get the eggs almost done. She says, “simmer eggs gently in sauce for about 10 to 12 minutes until the whites are nearly but not completely opaque.”

I had a hard time figuring out that balance so they were over done for sure. 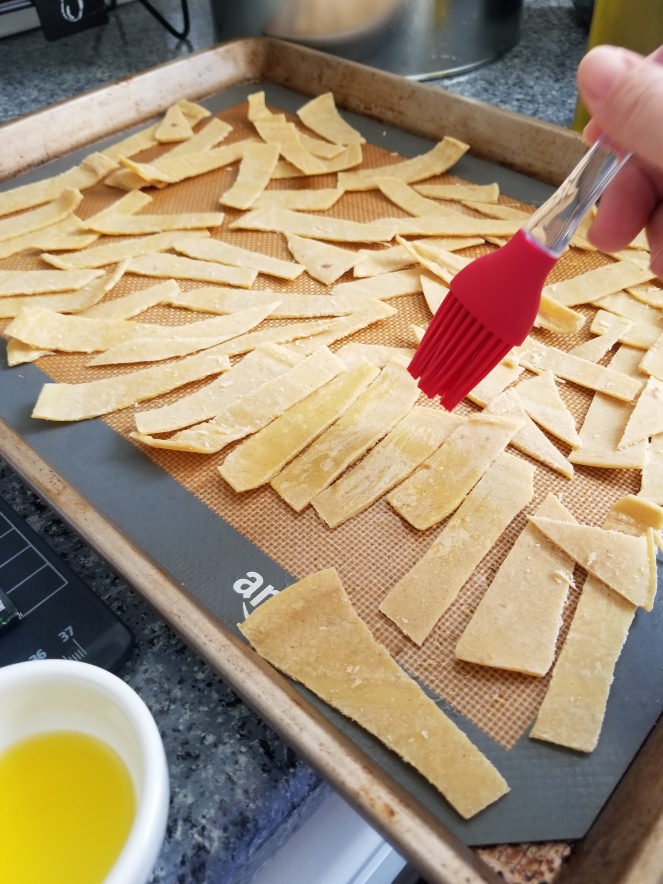 My husband is a fan of hard boiled eggs so he ate it right up! But I was a little grossed out by the results and just kind of ate all the yummy around the eggs.

And let’s talk about the lime crema!! It’s pretty amazing as a punchy topping.

Deb gives a talk about jalapenos and how to add it into your Ranchero sauce sparingly if you’re sensitive to heat. However this crema would help cut the spicy of the dish if you flubbed up and threw the whole jalapeno in there, not checking it for heat. 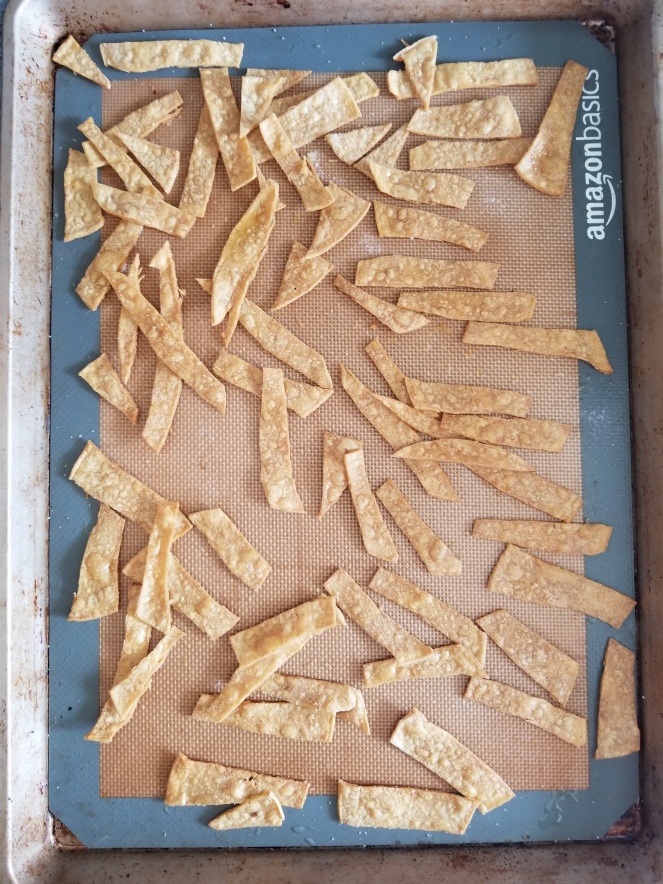 Honestly, I chickened out when I read that step. I kind of thought…”Nope! This girl who suffers from GERD is not bitting into jalapenos for heat testing.” I would have been running to the medicine cabinet to grab one of my precious pills that makes the pain go away when I eat greasy or spicy things.

I try to use those suckers sparingly becauae I feel like I can help the issue by eating healthier. But they are there when I need them. They are also there if I bite into jalapenos, but I thought better of it. I would happily take my chances. Thank our lucky stars it wasn’t too spicy.

This was not a super time consuming or technical recipie requiring any fancy kitchen gadgets like cheese cloth (I promise, that’s the last time I mention cheese cloth…haha). 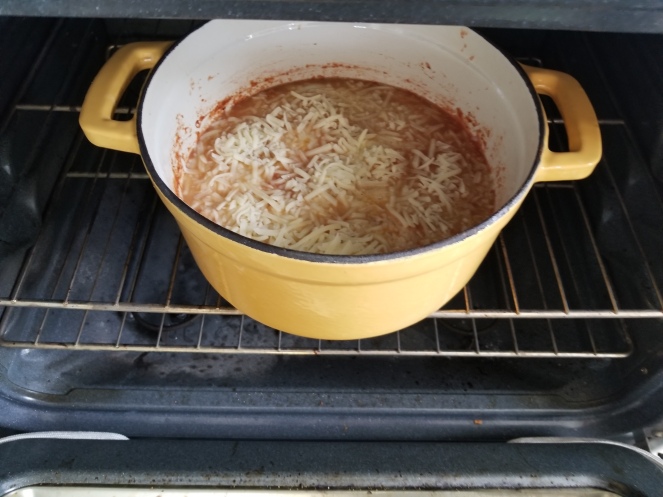 But I guess if you’re like me, a cast iron skillet is a fancy kitchen gadget. It’s on my Christmas list so I may be like you lucky ducks very soon!

However, I want to work out my kinks with using the Dutch oven on this recipie. I still feel like it’s a sturdier vessel to use for something like this. The Ranchero sauce pops while it cooks and since you’re supposed to cover the eggs while they cook, it just makes sense because of the Dutch oven lid and depth. I’m not super sure how I would have covered it if I had used a skillet.

It’s pretty when it’s finished though, right? And the DO matched the colors of the dish kind of perfectly. Maybe it’s just me but pretty food tastes better even though there’s hard boiled eggs in it :(

I hope you give this dish a go! You can find the recipe and reviews from a few other bloggers out there who have given it a try themselves!

(Recipe from the cookbook, The Smitten Kitchen by Deb Perelman, page 37-38)