My husband and I went to a marriage conference this past weekend. This is our 2nd year going to this conference and it’s crazy how much has happened since we last went.

I’ve been so excited to get to go to these kinds of things my whole life! I signed us up for 2 marriage conferences in our first year of marriage…poor David…and we had a really sweet time at both of them. The excitement was there! It was new and exciting and we had so little marital history to route through the sessions that it was all just kind of fun and not super serious.

Not in a bad way, but this year it was not about the giddiness of being married and finally feeling like I got to be included. This year was about going the next level down from where we were last year. It was a little more serious because we have a few more “incidents” to bring in. Still fun because I love spending time with David. But…different. I felt like we were in a different league.

The first night of the conference they give you a date night with your spouse. They supply the coffee and desserts and a table for 2 and you get to have some special time among the other conference attendees having a date. It’s really special to look around and see everyone working on their marriage. It felt significant and meaningful to be working on the same thing together with other couples. There’s a camaraderie about it that is hard to describe.

The theme of the conference this year was grace. I needed that theme.

It’s been hard since Ellie came for David and I to keep our momentum. We fight a lot more because we’re more tired and irritable these days. All things to be expected. But the work of marriage is setting in. It’s really hard to do with kids. No surprise there. People always say that. But I didn’t know what people actually meant by hard until I have had to live it myself. Everyone defines “hard” differently. Now I know what hard in marriage is for me right now.

David and I hit a wall a month and a half ago where we had to just called it and said…enough…something has to change. We’re not being nice to each other and these arguments are moving through the same cycle of unproductive. Let’s be pattern breakers, shall we?

That wall we hit was good. It caused us to start talking about where we were feeling missed. What’s funny is that we were both feeling missed in the same area. Neither one of us felt like we were being seen for what it is we were contributing to the family. We were not feeling very appreciated…more just…used.

Before we got engaged, I signed us up for another one of those classes. It was a seriously dating and engaged class through our church and it was honestly one of the things that helped us both feel ready to make the marriage commitment. It validated that we knew our blind spots and were going to do okay. We even have assessment’s results to prove it!

One of the things they taught us in that class was called the daily 5As. Those A’s are

5 min….we’re not so good at that yet, but we’re getting better.

Goofy as it may sound, this has totally been a game changer for us! It’s been the thing we needed to keep our moods up and the arguing down so we can really see each other’s  contributions. I’ve settled into a new appreciation for David and what he does for us. I’m grateful to have been taught this because it’s really helped mend our communication and we’ve stopped walking around frustrated all the time.

Maybe that was just my problem :)

…back to the marriage conference… 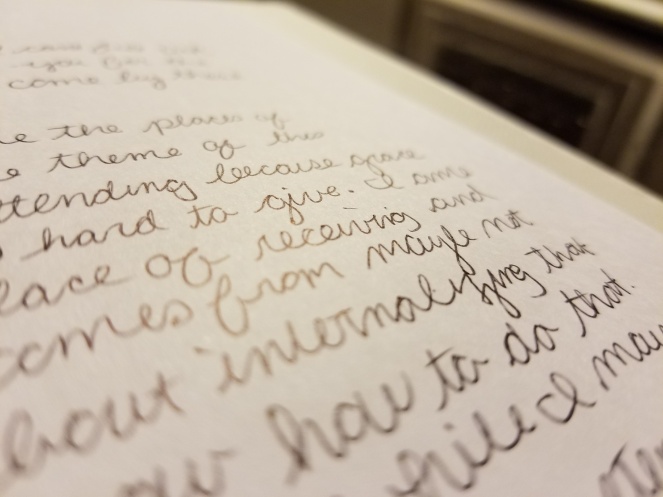 Grace. I needed to hear that theme in a setting surrounding marriage because while these moments with the 5A’s each night have been a helpful tool, I still feel stuck when it comes to having grace in our marriage.

My spiritual director was one of the speakers at the conference and she said that giving grace to our spouse has to come from a place within us that has internalized the grace we’ve received from God. That makes sense because if we’re able to receive God’s gift of grace for us, it might then overflow onto those around us.

What I realized was that I’m stuck there. I don’t know how to internalize the grace God’s given me. I feel like that’s something I need to be emotionally and mentally aware of in order to extend it and while the knowing part of me has it grasped the darn feeling part of me is not cooperating.

If you know the Myers-Briggs, I’m an INFJ….F stands for Feeling. I’m very feelings based! That causes a lot of problems in my ability to connect sometimes. If I don’t feel it, I don’t understand it. That makes the grace and love part of God very hard for me to work out of when I’m supposed to internalize it to overflow onto others. Thus…feeling stuck.

I spent time really thinking about this during the mini retreat they provided at the conference. We had an hour to journal and pray through some of the things that had come up for us from the sessions. This idea of internalizing grace was what I spent time thinking and talking to God about.

The thing I heard God say to me was…

“Spend time with me. I’ll teach you…”

That’s cool God. I don’t feel like I have much time for anything. I want to spend time with you but I feel stuck there too. Help! What do I do now??

“Spend time with me.”

Okay…but I’m not doing very well with that. I’m so focused on me right now that I don’t think about much of anyone else. I’m in selfish mode. I just know I’m going to fail at any consistency right now until I am thinking about someone other than me!!

….got it, God……you want me to experience your grace right now. I’m not going to get this right, am I? I keep trying but I keep failing. Instead of trying to out perform my expectation…maybe receiving your grace for not doing it “right” is kind of the point. Got it. Okay….let’s try that…

That moment is ringing through my head this week. I’m still failing at grace towards David and I’m only sort of doing better with spending time with God. But I can sit here and write about this and extend myself grace because…I’m really blessed.

Blessed to be married to David…..to be a mother…to have such a beautiful and mild mannered daughter…to be able to stay home and take care of Ellie…to have a roof over my head when so many recently in this country have completely lost everything they have…to have a car that’s running….that I have a man that loves me unconditionally and models God’s acceptance, grace and love for me….that I have a man who CHOSE me (that still baffles me)….that my husband has a job…that we are in fairly good health…that I have a family that’s terribly supportive of David and I….that we have food to eat…that life is really good right now.

Counting my blessings. That is what’s helping me get this grace thing. I think that may seem pretty “duh” for some people but what’s the point of this blog if I had everything figure out. “The Expert Life” just sounds a bit unrelatable :)