Recipe 9 from The Smitten Kitchen Cookbook by Deb Perelman

WW Note: This luxury is 22 points per cup. Ooft…If you sub out the maple syrup for sugar free syrup you can drop it to 19 points. This may not be an easy one!

I love quick and easy recipes, don’t you??

This is one for the books when it comes to easy. But it does have some ingredients that you’re likely not going to have in your kitchen pantry. The ones I had to go buy were:

I definitely forgot to get walnuts when I went to the store, but had pecans and almonds on hand so instead of a cup of walnuts I did a half of cup of each and that turned out really nice. So, I say use whatever your favorite nut is. If you opt for peanuts, I would go with unsalted because the coarse salt you add gives it a pretty salty taste despite how little you’re using.

I also subbed out regular cinnamon for a drop of my cinnamon bark doTERRA essential oil. I realized that I probably could have done two drops when it was all finished, but when I was mixing it in and when it was baking, the smell of cinnamon was so strong I was pretty sure I was going to regret using the oil over the ground cinnamon from my spice rack.

Turns out that one drop doesn’t do much for the cinnamon flavor of the granola so if you’re like me and don’t totally hate cinnamon flavor, add in a second drop. Click on the hyperlink above to purchase the oil if you don’t already have it (then click “shop” from the top ribbon > single oils > and search for cinnamon bark). If you already have a cinnamon essential oil, just make sure it’s safe to consume before using it in this or other recipies. 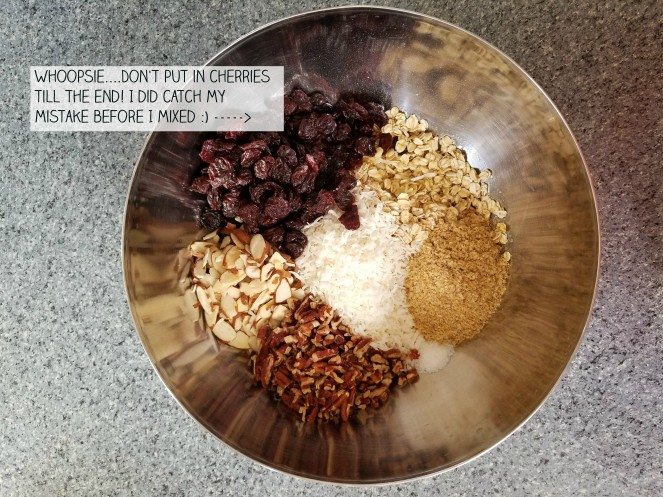 Also…what the heck is wheat germ, right? I told my husband it was in the granola and he says…”oh yes, I taste that.” I gave him a look and said….”WHAT?! How do you know what that even tastes like?” And then, bless him, he goes off into some explanation I wasn’t really listening to about what wheat germ was…*sigh*…and I give HIM a hard time for not listening to ME….hypocrite here…sorry folks.

…wheat germ…turns out that it’s the part of the wheat plant wheat that grows a new plant. Kretschmer explains on their site:

“Tiny in size, but a nutrient-rich powerhouse, wheat “germ” (short for germination) is the part of wheat that sprouts and grows into a new plant. Despite being the most vitamin- and mineral-rich part of the wheat kernel, it’s left out when wheat is processed into white flour.”

I had to search around our local Walmart to find it, but they do sell the Kretschmer wheat germ if you are looking for it. I found it near the cereal and healthy food aisle. 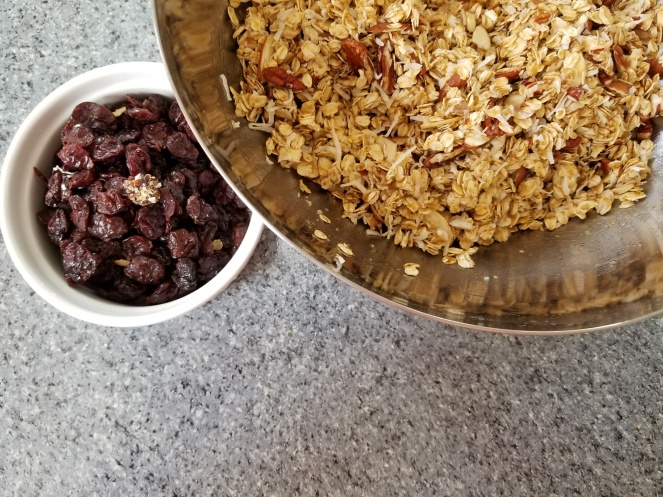 Other than that, it’s pretty much mix and bake. It makes about 4 cups of granola and while mine didn’t really cluster like she indicates, you can still do all the granola things you would want to do with it…over yogurt, ice cream, baked fruit, etc.

It’s the kind of thing you’ll be proud to have people eat because they will be happily surprised that you “did all that work!”

Jokes on them because it’s not so difficult!

But take the compliment.

Dee suggests keeping it at room temperature in an airtight container for up to 2 weeks, but it keeps even longer in the freezer.