So, I love bbq…we’ve established that. And what better way to get that bbq flavor any time you want then to make up a chex mix that is easy to munch!

My first attempt at making this recipe was a few years back from a Super Bowl party at home. I did it in the oven because I thought it was laughable to do in the microwave. Not to mention, putting stuff in the microwave to cook seems…less like cooking…more like…something else. It doesn’t feel like cooking unless I’m turning on a stove or oven so if someone  tells me to take the short cut in a recipe and do it in the microwave, I usually turn up my inexperienced nose and use the oven/stove to complet the recipe, convinced it will taste better.

Well, I should have hung my head in shame after making this in the oven. It was a soggy, sticky mess and not very delicious….at all. Boo. I, of course, blamed the failure on the recipe and vowed to never try it again.

2 years changes things, because I got it in my head to cross the bridge one more time and give it a try when I had the same bbq craving this summer. I need to get off of my mental high horse regarding microwaves because this recipe is a total success in the silly thing. And FAST! If you’re having a party or work full time like me and need a quick something to bring to a get-together, this may be your new go to!

Here’s the recipe and my experience with microwave cooking :) (CHEAP NOTE: The cheapy in me bet myself that I could get all the ingredients for this yummy snack at the 99 cents store. I was almost right…just had to get the Chex Mix at the store. Everything else was a quick pick up there. Score! )

Step 1: Grab a bowl and your ingredients. The recipe calls for Cheese-It type crackers, but I found these whales at the 99 cents store and I have to say, this is my new favorite cheese cracker to add to this mix. Better flavor then the cheese its.

Step 2: Mix your dry ingredients..6 cups of Chex, 3/4 cups honey roasted peanuts, 1.5 cups of pretzels and cheese crackers. I have been using my big red plastic bowl for this project, however, I’m pretty sure that’s not a great idea when microwave cooking. Best bet is a nice big glass bowl. Much less toxic.

Step 3: Combine your other ingredients for the sauce…garlic and onion powder, bbq sauce and vegetable oil. My little oil bottle looks like it’s olive oil…it’s not…thus the silly blue label. Had to use the vegetable oil for something so I decided to pour the small amount I had left into the glass bottle. Very hand, but confusing for this recipe :) 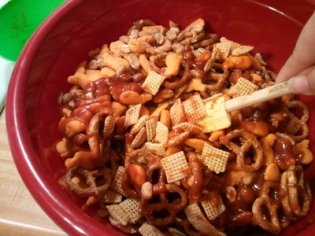 Step 5: Mix it well. I have to admit that the first time I made this I was highly skeptical that the little amount of bbq sauce mixture was going to coat that 6 cup+ mixture of dry ingredients….but have faith. It does cover the whole lot of it. I found that the bbq sauce that tends to be thinner is better for this recipe. I’ve used KC

Masterpiece and then this dollar store buy and though I prefer the taste of KC or a Kraft Honey BBQ sauce, this one did a better job combining. My one tip is to mix well and try not to make up any more of the bbq mixture if possible. Remember you don’t want this to be soggy but crunchy. The more you put on, the longer you’ll likely have to cook it. Here is a picture of what it looks like all mixed…not a whole lot different hu :)

Step 6: Put your bowl into the microwave and put 7 min on the clock. I recommend opening up the door and stirring after the first 2 min and then I usually open and stir every min until I hit the 7 min mark. I’ve had an incident where the mix started to burn, so I’ve been careful ever since. As a hint, you won’t notice anything magical happening to the mix. It’s not going to look much different from when you put it in so don’t be using that as a sign to know when it’s done. I’ve learned that the hard way and I wish they would have explained it in the recipe.

Here’s a picture of what it looks like after a few min in the microwave.You can kind of see what I mean…nothing much different. Don’t worry, you’re still doing everything right. It’s going to seem like it’s still too wet when you finally pull it out, but don’t be discouraged, just follow through with the recipe. 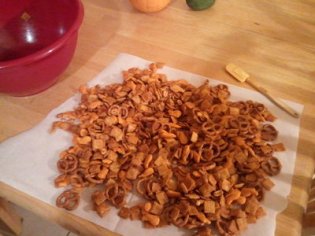 Step 7: Roll out your parchment/wax paper and spread your mix and separate the pieces. Believe it or not they will dry and be crunchy! They will also be stuck together so you can put them in a Rubbermaid like shown below and shake the dickens out of it. That is sure to separate the pieces….I guess the same can be said for a gallon bags…but then you don’t get the terribly loud noise…choices, choices.

I hope you give this a try. My Life Group friends enjoyed it…think Jamie and CJ tried it this summer too… I’d like to try this with some of the other flavors that the Chex website offers.  Tell me of your Chex mix adventures below!