I feel like that title needs to end with an “Oh My!”. Just like Wizard of Oz…this was another adventure in cooking….okay that’s hammy I know, but a nice segway, don’t you think?!?

I made this meal up last Sunday before my room mate came home and our cinnamon roll baking experience began…(to follow in a future post). Before she got home I decided to make up a nibbly lunch…meaning snacky stuff and not exactly healthy :) I was in the mood for a lighter lunch and so I decided to go through the pantry and refrigerator and figure out what I had on hand.

I’m a big fan of making home made pita chips since it’s a very easy and quick snack to have with store bough hummus. I’m also a big fan of using my old tortillas for a savory or sweet snack. That is what inspired me to get this snacky meal going since I had both on hand. I had bought some goat cheese (Jamie will appreciate that..:) at the store and had a few ripe avocados from our tree (I’ll have to take a picture to show you…it’s huge!) to make some guacamole…so this was quickly becoming a chips and dips meal!

Usually when I make pita chips I use a cayenne pepper/sea salt mixture that I keep on hand to season the pita chips. However I switched it up this time around. You see in the picture above that there is a little red topped Rubbermaid container, which is my home made taco seasoning.  I decided that would complement the guac a little better and was an easy substitute. The taco seasoning is from a grilled chicken taco pizza recipe  on the Food Network posted by Aaron Mccargo, star of Big Daddy’s House. I love this recipe because it makes up lots of extra that I get to use long after I make the pizzas. I highly recommend making some up for stuff like this when you want to spice up your homemade tortilla and pita chips. It’s awesome with avocados to make a salsa as well (used on the top of the pizza (see recipe via link above).

Back to the process….I started everything out by cutting my pitas in strips or chip shaped pieces. I like doing strips…mostly because I stink at making chip shaped chips :) I kind of like using older pitas, because they end up having a crunchier finish, but the results can be the same with newer pitas if you set your oven temp accordingly. 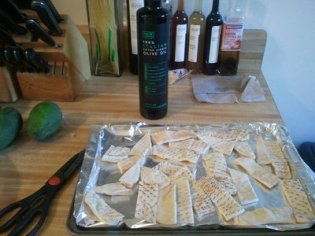 I then drizzle the pita pieces with olive oil. I always use olive oil however, I’ve resorted to vegetable oil when I’m out of olive oil and get the same results….so I think it’s safe to say you are good to use whatever oil you have on hand. You don’t have to use a whole lot of oil to do the trick but feel free to brush the oil on to get an even coat to cover the pieces. 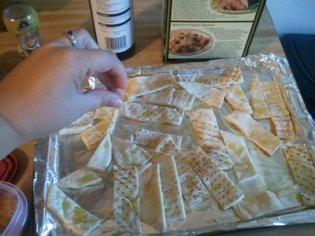 After coating them with oil, I sprinkled the seasoning over them. I’ve made the mistake of going overboard and regretted it since it’s far too strong. So, I’ve learned the age old saying of “less is more” works wonderfully when seasoning the pitas. 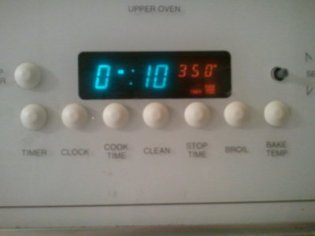 The next step is to put them in the oven. This time I put them in for 10 mins at 350 degrees. this is just a starting point. You can always keep them in longer depending on what consistency you’re going for. I like the crunchy/soft texture to them. You can also put them in at a low broil setting for a shorter amount of time and get nice crispy chips. If you broil, please learn from my mistake and DON’T GO FAR! 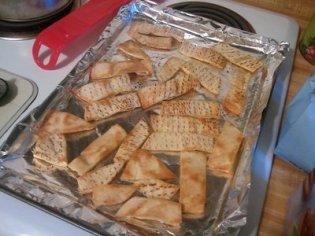 I can’t tell you how many batches of overdone pita chips I’ve made because I decided to go to the bathroom or in the other room….some were still edible and others…lost forever. “Why didn’t you put a timer on” you ask?…I don’t have a good answer to that other then to say that I make stupid mistakes in the kitchen…a lot…which is what this blog is kind of all about :) So, learn from my mistakes…set a timer and stay in the kitchen if you decide to broil them. I recommend 3 min on the clock…you can probably gage your oven’s strength after 3 min and then flip them over and go from there :) Good luck! Above is what mine looked liked…one of my better batches.

Next I made up the guacamole from our ripe backyard avocados. Actually…these were probably picked too soon since the color of the avocados looked a little too light. Still had a great flavor but it looked a little funny. Avocados may be a post I do later, after some research. I should know how to pick them since we have a tree.

Anyways….I used the seasoning packet that you see above. I can get them at our local 99 cent store so it’s the cheapest and tasty way to make up guacamole. The only thing I’ll add is some fresh lime juice (also from a tree out back) to keep it pretty colors. My family is a big fan of guacamole so we make it a lot with family get-togethers and this is the seasoning that we’ve all come to like. Some mixes are too spicy for our “gringo” heart-burn prone palates so if you share these restrictions, I recommend this one :) I wanted it to look more restauranty so sprinkled some Parmesan cheese on the top of it when I was done (see picture below) which was a yummy addition…not sure if that’s actually what they use in the restaurants but it sure tasted good :)

As I mentioned before I also made up some tortilla chips from old tortiallas. I had bought some cilantro jalapeno toriallas from  Fresh and Easy and decided to make some chips out of those for my Mexican Chips and Dips extravaganza!! I have made chips by deep frying them but that was a little more involved them I wanted to get to today, so I went for baked chips. I decided to just use my cooking spray to coat them and chose not to use any salt or seasoning since the tortillas had flavor enough. 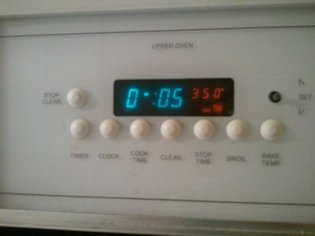 I put them in the oven for a little shorter amount of time since they definitely don’t take as long. Again this was just a place to start. They can stay in as long as you need them to. I didn’t take a picture of the finished product but you’ll notice them in my final picture. I had some fun trays that I put them in and kind of left them out to enjoy throughout the day  It was a tasty and easy meal for the lighter lunch I was in the mood for. I pulled out my goat cheese and put it on a plate with some garlic cracked pepper crackers and some kalamata olives. As pretty as I thought it looked, it also tasted pretty awesome too. I’m a big fan of the olives and goat cheese together. I’m wish I had, some carrots or tomatoes or something else to add to these over carbed trays…maybe next time.

So that was my fun chips and dip lunch last Sunday! No big mistakes this time because it’s all stuff I make pretty regularly but I would still love to hear any tips or tricks that you have in making these same things. . I’ll be posting my adventures with making Cinnamon Rolls with my room mate Emily very soon and I promise that, that experience is filled with oopsies and boy-I-hope-this-works moments…since those make the journey of cooking more fun I’ll include all of them! More to come…let me know what you think of the stories so far! Would love to hear from any and all readers!